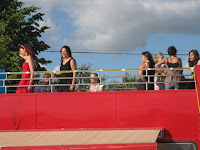 Bliss. Fields. Given we set out to provide exactly that feeling in precisely that environment, it was a happy day when good friend of the Bus, Matt, agreed that this small (but perfectly formed) shindig should provide us with our virgin outing.

Mr and Master bus arrived in the hamlet that is Bradley, just outside Winchester for the first sunny weekend of the year, and set to work.

And when the bar was set up, the tub filled, and warm, and the crew quarters built, as the first few punters arrived, it began. 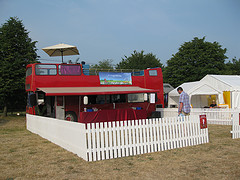 Joined by Miss Bus, cousin Simon, and the plastic dinosaur loving Nettie, the weekend flew by. With impromptu sets from Mach V, he of Echasketch visual joy, the afore-mentioned Nettie and others, as well as programmed DJs, and the Bus became a haven for ravers, especially those for whom the melodic sounds of Laura Marling were not a viable attraction. 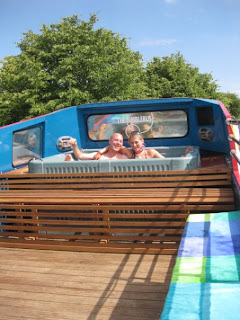 The cocktails – notably Baldheads Apple Mojito – and the prosecco poured. The Mumfords, their sons, and many others joined us, and we christened the tub (no – not in that way!). Sombreros were worn. Large yellow sleeping bags ran around the campsite. The sun shone. The sun set. Finally, we were on a bus, making friends. In a field.
And it was bliss.
Newer Post Older Post Home

We've the Bubblebar, with on tap bubbles (of course!), cocktails, and more, coming complete with a 100 m sq private Garden, a roster of the finest DJs, late opening, witty banter and endless hospitality.

All you have to do is conduct yourself in a manner becoming...

Available for private hire, the bus works equally well as

- a Backstage Bar, with conductors concocting any cocktail you can cope with,

- an Alternative Stage, with DJs or a 5 piece band playing to groupies in the hot tub and the bar flies below,

- a Luxury Camper ‘Van’, complete with a triple bed, and it’s own loo, or

- a Promo Vehicle, able to promote your brand, anywhere, anytime.